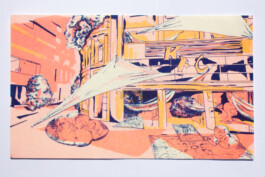 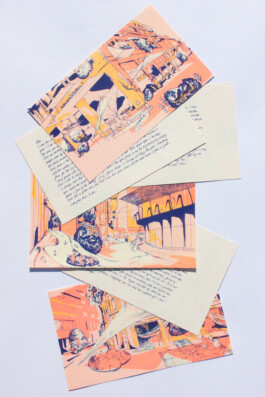 What if we were in a future where we collectively decided that an economic system based on others’ exploitation is no longer an option?
What if, instead of being erased, former symbolic places of consumerism would be turned into new commons, places for being, resting, playing? This speculative research does not look at ruins as a symbol of destruction and chaos, but as an opener of possibilities. Ruins of the old world become a passage toward renewed forms of living together, and a trace of what has finally been left behind.
This project currently takes the shape of riso-printed postcards, displaying illustrations and fiction stories from a hypothetical everyday. 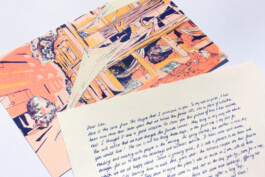 “It truly is a damaged world that we are dealing with, damaged by the precise practices of advanced capitalism and what it does to the living, to the soil and to the very own feelings of the commons. The challenge is indeed to invent new ways to live in this damaged world: not to save (preserve, conserve, repair and come back to former states) nor to survive, but live, that is, a renewal of good habits, a cooperation with all living beings and a responsibility to life in general. To live in these remains or, more simply, to imagine practices and implant them in the interstices of capitalism, in what it allows without aiming at it, in what it does not know it authorizes (...). In what it did not plan, in what it is not concerned about and that it still does not know how to damage (our desires and our links); even in everything it facilitates, when it happens as such.” — MARIELLE MACÉ, "Nos Cabanes" 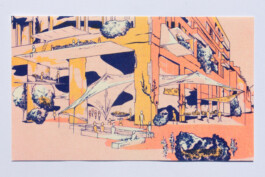 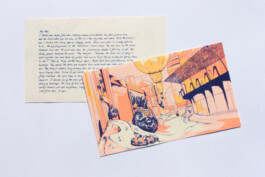